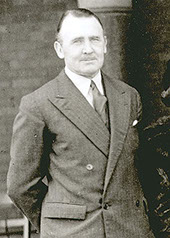 George Edward Swinton was born on the 20 of November 1890, the son of Colonel George Swinton and Edith Bessie Swinton.

He was educated at Shrewsbury House and Marlborough.

During the Great War, he fought with the 1st, 2nd and 8th Battalion in France and Belgium, being wounded 3 times. He won his Military Cross at the Battle of Amiens, in August, 1918.