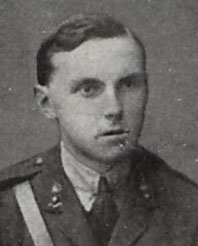 Rayner Harvey Johnson was born at Surbiton on the 5th of January 1897, the son of Alexander Johnson and Caroline of "Waveney", St Lary's Road Long Ditton. He was the Grandson of Dr Price-Jones who built Shrewsbury House school. The School’s Art room was named after Major Johnson.

He was commissioned on the 22nd of April 1915. Was believed to be the youngest Major in the British Artillery. He was awarded the Military Cross for gallantry in the field in 1918. He was killed at Battle of Cambrai on the 27th September, 1918 - aged 21 years.