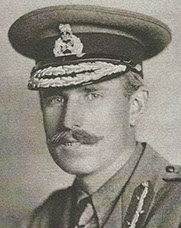 Philip Howell was born on the 7th of December at Surbiton, the son of Lt. Colonel Horace Howell and Ella Howell. He was baptised on the 7th of January 1878 at St Mark's in Surbiton.

He was brought up in India, but returned to England for school in 1887. He attended Shrewsbury House for two years as a day boy and then went on to Lancing College.

Prior to the war, he had served in India with the Queens Own Corps of Guides Regiment and in Ireland and was the Times Correspondent during the Balkan Wars.

When war broke out, Howell was a Major, and he arrived in France in August 1914. He was immediately in the thick of the fighting, as he took temporary command of the regiment when the commanding officer was killed. Between this time and his death, he was mentioned 6 times in dispatches.

He became Chief of Staff II Corps, Fifth Army in 1916 and was killed at Authuille, the Somme on the 7th October, 1916 - by a stray shell. He was seen as one of the rising stars of the Army at the time of his death and had been predicted to reach high rank. Haig became Godfather to his son.