3rd Battalion, attached to the RAF 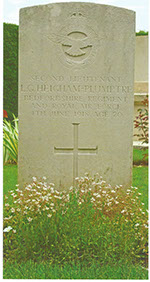 Leslie Grantham Heigham-Plumptre was born on the 9th of October, 1897. His father was the late J.V.N. Plumptre of London, a solicitor. He was adopted by Henry Heigham of 43, Redcliffe Square, S.W..

He was educated at Shrewsbury House, Westminster and the Royal Military College, Sandhurst.

He was gazetted as a 2nd Lieutenant in The Bedfordshire Regiment on the 11th of September 1917, being attached to the Royal Air Force in December of the same year. He served with the Expeditionary Force in France and Flanders from 11 March, 1918. He was shot in the right shoulder on the 22nd of March and was invalided home. He returned to the front on the 19th of May. He was injured in a flying accident, near Abbeville, on the 2nd of June, 1918, and died two days later. He was 20 years old.