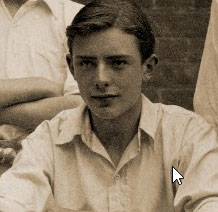 He was educated at Shrewsbury House Preparatory School and at Abingdon School in Bershire. He then went on to the Royal Military College at Sandhurst.

He was commissioned in the Essex Regiment on the 15th of August 1914. During World War One, he was attached to the 2nd Battalion Royal Scots Fusiliers. He was killed in action on the 12th of March 1915; he is commemorated on the Le Touret Memorial Panel 26.