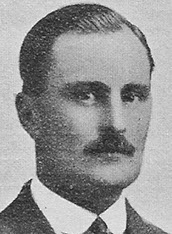 After Shrewsbury House, Dugald Gilkison went to Rugby, which he entered in 1894. In 1898, he went on to R.M.C. Sandhurst, which he passed with Honours.

He was gazetted to the Scottish Rifles in February, 1899; he served in the South African War, where he received the Queen's Medal with five Clasps, and the King's with two. He was appointed 2nd Lieutenant on the 11th of February 1899 and promoted to Lieutenant on the 30th of December of the same year. On the 14th of January, 1905, he was made Captain.

When World War One started, he was part of the Expeditionary Force in France and Flanders. He was killed in action at the Battle of Aisne on the 20th of September 1914 - aged 34.

He left behind his wife Janet Kate, whom he had married in 1905, and four children.