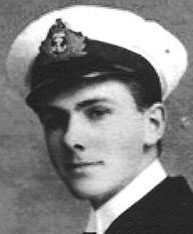 Osman Cyril Horton Giddy was educated at Shrewsbury House Preparatory School which he left in 1912 with Honours. He then went to the Royal Naval College at Osborne in 1913 until 1915 - where he left as a Cadet Captain. After a year at the Royal Naval Training College at Dartmouth, he joined the Grand Fleet in the HMS Minotaur as midshipman. He was present at the Battle of Jutland in 1916. He took part on the Raid on the Bolshevik fleet at Kronstadt in 1919, where he was wounded and captured. In recognition of his distinguished services as second in command of H.M. Coastal Motor Boat 24A in the attack on Kronstadt Harbour on the 18th August 1919, he was awarded the Distinguished Service Cross. He served in operations/planning in the Second World War.