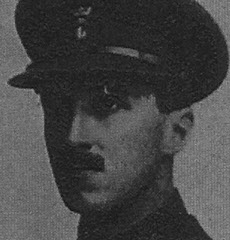 He was educated at Shrewsbury House Preparatory School and Wellington College. After school, he went to R.M.C. Sandhurst.

When the war started, he was in India, but returned to the UK and served in France from December 1914.

He was awarded the Military Cross on the 14th of March, 1915, and the Distinguished Service Order on the 4th of June, 1917. He was severely wounded in 1915; he recovered and went to Gallipoli in the same year and was promoted Brigade Major and then Captain on the 1st of December 1915.

He was killed at Poelcappelle, during the Third Battle of Ypres, on the 5th of November, 1917 - aged 29 years.